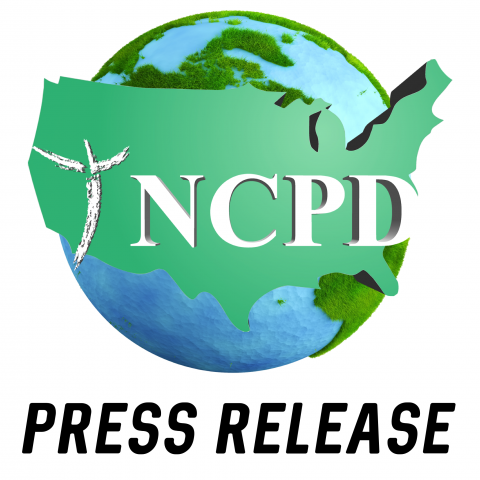 Janice L. Benton, Executive Director of the National Catholic Partnership on Disability (NCPD) is pleased to announce the recipients of four National Awards. The presentation was made at NCPD’s National Conference, Partnership 2013: Where Faith and Disability Meet, in Houston, Texas, November 2, 2013.

His Eminence Daniel Cardinal Dinardo, Archbishop of Galveston-Houston, Texas, received the Visionary Leadership Award recognizing an individual who possesses a vision for the full inclusion of persons with disabilities in the life of the Catholic Church.

“Cardinal DiNardo leads by example, with humor, with deep insight and with a willingness to explore new methods of reaching out to people with disabilities. He is visionary in guiding NCPD to continue to find ways to involve all people in our Church and to recognize that we are all in a marvelous partnership with God,” notes Susanna Herro, current Chair of NCPD’s Board of Directors.

With a vision of Church pointing the way to moving beyond our sometime narrow and distorted attitudes and beliefs about disability, Cardinal DiNardo encourages people to embrace and nurture the faith life of all individuals regardless of their particular circumstances. Through his work with NCPD and as immediate past Chair of the United States Conference of Catholic Bishop’s Committee on Pro- Life Activities, Cardinal DiNardo championed the life and dignity of persons with disabilities from conception till death. His influence is felt in the US and beyond our borders in ensuring the full participation of persons with disabilities in the Catholic community.

Ms. Grace Harding, formerly the diocesan director of disability ministry for the Diocese of Pittsburgh, Pennsylvania, was honored with the Monsignor Cribbin Lifetime Service Award. Named after the late Monsignor Thomas Cribbin of the Diocese of Brooklyn, New York, for his unwavering efforts to ensure the participation of persons with disabilities in the life of the Catholic Church, Ms. Harding is an exemplar of steadfast service.

“Grace Harding has had a phenomenal impact on disability in the Church, not only in the Pittsburgh dioceses, but also round the country with the Rose Fitzgerald curriculum. Her work has touched the life of countless people throughout the country. We are so grateful for her lifetime service.,” says, Jerry Freewalt, former Chair of NCPD’s Board of Directors.

The Youth//Young Adult Leadership Award was awarded posthumously, to Mattie Stepanek, a young man whose short life has inspired many people, including former President Jimmy Carter. This award recognizes a Catholic youth or young adult with a disability, age 35 or younger, who has worked collaboratively and demonstrates outstanding leadership in advancing access and inclusion of persons with disabilities in the life of the Catholic Church and society.

By recognizing Mattie’s contributions, NCPD honors the profound impact even such a short life can have on shattering barriers and inspiring individuals to levels of acceptance and inclusion that had not existed prior to knowing Mattie. Through his poetry, Mattie advanced a new understanding of disability and the dignity of each life.

Reflecting on Mattie’s life, Ms. Peg Kolm, Coordinator of Disability Ministry for the Archdioceses of Washington, says, “Mattie’s life and work continues to resonate especially with young people. The posthumous recognition of his leadership, commitment and devotion to the Catholic faith is indeed an honor for the memory of Mattie, as well as the Archdioceses of Washington in which he ministered.”

Dr. Hilliard, JCL, Phd. RN, holds graduate degrees in maternal-child health nursing, religious studies, canon law, and professional higher education administration. For the past 6 years, as NCPD Board member and chair of its Ethics Committee, has freely given herself to NCPD, writing, discussing, teaching, advising, on assited suicide, futile care, organ donation, and other matters that have raised unprecedented threats to the lives of people with disabilities. She is currently director of Bioethics and Public Policy for the National Catholic Bioethics Center. Whether as nurse, ethicist, or canon lawyer, she has tirelessly promoted the sanctity of human life and the traditional family, even in the face of threats to her own life and career.

Atty. Stephen Mikochik holds many similarities to Paul Sauerland. He also, despite losing his sight at an early age, has spent his professional and personal life in both the secular and church arenas advocating, educating, testifying publicly, and writing to advance the rights of individuals with disabilities. He is a professor Emeritus at Temple University on Constitutional Law, an Adjunct Faculty at Ave Maria School of Law, and holds a graduate degree in theology.

In just the last four years alone he has successfully testified before the Maryland state legislature in opposition to a proposal to harvest organs for donation from patients in a vegetative state; gave testimony in CT that was credited as preventing a proposal to legalize physician assisted suicide from advancing; provided invaluable legal assistance to the National Catholic Bioethics Center in its testimony in opposition to the US Dept. of Health and Human Service’s contraceptive mandate; assisted the Texas Catholic Conference in addressing its futility care law, which discriminates against persons with disabilities; and has been involved with petitioning for a proposal by the Organ Procurement and Transplant Network that would not violate the informed consent of persons with disabilities.

The NCPD website, www.ncpd.org. features highlights from Partnership 2013: Where Faith and Disability Meet. Visit the website to discover innovative efforts of hundreds of individuals, parishes, and partners. Best practices will be shared for opening doors for the full and active participation of all Catholics into full participation into the life of the Church. Some of the topics are bioethics, mental illness, autism, sacramental preparation, family support in a multi-cultural environment, and much more.