A Homily about Mental Illness 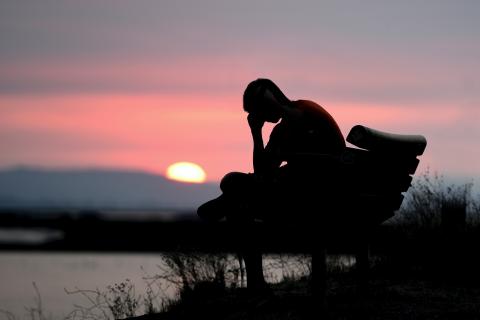 Imagine having an illness that causes people to look down on you and to treat you with scorn simply because you have the illness. That is what happened to people who came down with leprosy, a deadly skin disease, at the time of Christ. As we heard in the first reading (Leviticus 13:1-2, 44-76), someone who had leprosy was declared “unclean.”  They were made to go and “dwell apart.”

Imagine if you were the parent back then of a child that developed a skin blotch that looked like it could be leprosy–how worried you would be. You would do everything you could to protect your child. You would do anything to find a cure.

Imagine if you were a young person, just starting your journey into adulthood and you notice a rash – could it be leprosy? You would do everything you could to hide it, perhaps even deny it.

But then the illness progressed. It was not a passing thing. It was real. It was leprosy. And there was no cure.

Then the neighbors found out, your friends found out, you lost your job because of the illness.  People thought you or your family did something wrong because you got the illness–a sin, a failing of some kind.

There was shame, sadness and even grief–a longing for life before the illness.  There was no comfort. And perhaps worst of all–no hope.

Thank God that today there is a cure for leprosy. No one has to live a life like that today if they contract leprosy.

But, is there anything like leprosy today? Yes, sadly, there is.

What if someone told you that you or your child has schizophrenia, bipolar disorder, clinical depression or some other type of serious mental illness?

Serious mental illness affects over 1 in 20 people–it is a common illness, but we don’t like to talk much about it. And nearly 50 percent of us will have to deal with some type of psychological disorder during our lifetime.

When serious mental illness strikes you do everything that people did in ancient Israel when there was a diagnosis of leprosy. As a parent you would be concerned beyond belief. As the one with the diagnosis, at first you would try to hide it.

You are overwhelmed by the stigma–the social stigma. So many people do not understand - some will be afraid of you - you will be looked at differently. You will be worried about being lonely and misunderstood and not being able to find work.

And then the realization will sink in that there is no real cure. If you are lucky there may be medicines and therapy that will allow you to live with the mental illness–but not everyone is so lucky.

If you have never experienced a serious mental illness it is hard to understand what such illnesses can do. How the illness can totally disrupt a person’s life.

A couple of weeks ago I was invited to a training session on mental illness with the first year students from the Geisinger medical college. We put on head phones and the types of sounds and voices that a person with Schizophrenia lives with were piped through.  It was frightening.  Like someone living with Schizophrenia, I had no control over the sounds and the voices.

We were given basic cognitive tests to do, such as finding words or number sequences.  It was incredibly hard to concentrate and we couldn’t do them. Some of the students were really rattled – after all they are used to being the best. One student could not even recall who was President.

It is no wonder that a person with a mental illness can, at times, be difficult to be around or that their behavior can be irrational and frightening.

So, what should we, as Christians, as members of the Catholic Church do about this?

Well, as in all things, we should look to Christ. In today’s Gospel, when the leper asked for help Christ reached out to him. Christ saw him as a person in need and he was moved with compassion. (Mark 1:40-45)

Pope Saint John Paul II said this: “Christ took all human suffering on himself, even mental illness. Yes even this affliction, which perhaps seems the most absurd and incomprehensible - configures the sick person to Christ and gives him a share in his redeeming passion. Whoever suffers from mental illness "always" bears God's image and likeness.”1

The Church is not called to cure mental illness – that is the task of medical science.  We are called to be a healing presence to help people find wholeness and peace in the midst of the illness. The Bible uses the word “Shalom” – which is a right relationship with God. Our call is to help people with a mental illness find a healing presence, to experience God’s Shalom.2

Here at St Peters we offer a spiritual support groups for anyone living with a mental illness and for the parents and family members who support people with a mental illness.  You can find information about these groups in the bulletin, in our brochure and on our web page.

Our goal is to share our stories, support each other and pray together so that no one feels alone in their struggle with mental illness.

You know, people who live with a mental illness are some of the most courageous and brave people I know.  They deserve our respect.

They do not want our pity – they simply want to be welcomed and loved.  They carry a cross that is so heavy and hard to fully understand – but Christ understands.

We pray to God, the Lord of Mercies, to comfort and relieve those who are troubled in spirit because of a mental illness. Bring them hope. Bring them peace and bring them the consolation of a loving Church community. Amen.

1 John Paul II, “Address of John Paul II to participants in the international conference sponsored by the Pontifical Council for Pastoral Assistance to Health-Care Workers, on the theme: "In the Image and Likeness of God: Always? Illness of the Human Mind," November 30, 1996, L'Osservatore Romano.
2 Jean Vanier and John Swinton, “Mental Health: The Inclusive Church Resource” (London: Darton, Longman and Todd Ltd, 2014) 77-78.