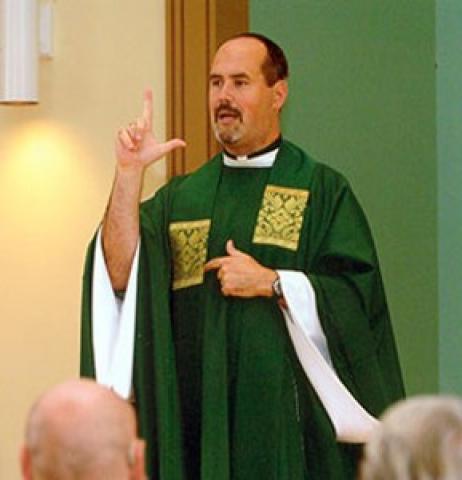 People unfamiliar with Deaf people or Deaf ministry may not realize the many complex challenges they face in the Church. This article will discuss a few of them to help readers appreciate both the pastoral workers who serve Deaf Catholics and the faith of Deaf Catholics themselves in spite of limited resources.

The first of many challenges is that they do not speak the same language as our Church leaders. Since English is not a Deaf person’s first language (because they have never heard it) they are at a disadvantage from the start. Other disability groups speak English and make themselves and their needs known. They also integrate more readily into the liturgy once their needs are met (e.g., installing ramps, accessible doorways, etc.).

Second, due to the invisibility of their handicap, the Church often overlooks the Deaf. When advocates for the Deaf address bishops and priests about their specific needs in the Church, they often hear: “We don’t have any Deaf people in our community.” In reality, the U.S. census shows there are approximately 30 million Americans who experience various degrees of hearing loss while 3 million have a profound loss. It is estimated that of this number 300,000 are culturally Deaf. Culturally Deaf use a capital “D” to identify as users of ASL, interact with other ASL users, often marry each other, attend Deaf churches and organize events for their own benefit.

Third, underserved Catholic Deaf struggle with the shrinking number of priests who are proficient in ASL. For example, in the state of Ohio there are only two priests who work with the Catholic Deaf. The Archdiocese of Detroit is the only diocese in Michigan that has a signing priest and an office solely dedicated to the spiritual and pastoral needs of the Catholic Deaf. A few large dioceses, such as Washington, DC, Philadelphia, Chicago, Los Angeles, and San Francisco also have ministries while similar services in smaller dioceses are basically non-existent. Unfortunately even many large dioceses, in spite of their resources, are not offering many services to Deaf Catholics.

With a limited number of signing priests, many Deaf people struggle to have access to the sacraments, which hearing people take for granted. Many Deaf Catholics have not had the Sacrament of Reconciliation for years.

Fourth, many dioceses every year cut back the budget for Deaf Ministry.  This has led to the vicious cycle between cutting back ministry and losing the Deaf in the Church.  For example, in an archdiocese in the West, after eliminating the position of Deaf Ministry coordinator, the responsibility of Deaf Ministry was transferred to a person who already had other various responsibilities. The person, who did not know sign language or understand the needs of Deaf Catholics, was inadequately prepared for their new responsibilities. Because of this, many Deaf Catholics quit going to Mass. A few years later the archdiocese noticed a decreasing number of Deaf, and furthered cutbacks on Deaf Ministry.

Not surprisingly, Deaf Catholics have been joining other denominations, such as the Jehovah’s Witnesses, Mormons and Baptists who seem to have effective Deaf ministry and strong support and commitment from their church leaders. However, studies have shown that 97 percent of Deaf people do not go to church.

With the many challenges, it is laudable there are still Catholic Deaf who remain faithful to the Church. Deaf Catholics are grateful to the pastoral workers and other individuals who continue to recognize and support their faith in spite of diminished diocesan support. May their perseverance and faithfulness inspire other Catholics, both Deaf and hearing, to do likewise.