Affirmation of Pastoral Statement of U.S. Catholic Bishops on Persons with Disabilities 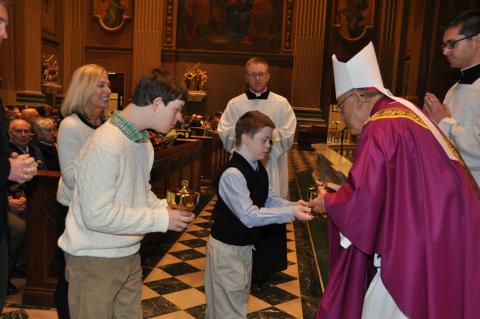 A Call to Encounter and to Wholeness

1. We mark and celebrate the 40th anniversary of the Pastoral Statement of U.S. Catholic Bishops on Persons with Disabilities (Pastoral Statement) issued November 16, 1978. The statement begins with an affirmation and a challenge, reminding all Christians that the animating principle of our merciful regard for one another, amid our various limitations and disabilities, is the call of Jesus Christ to follow him.1 In his earthly ministry, our Lord Jesus called to himself a people from every walk of life and circumstance, and Christ calls us to embrace with him persons we often fail to recognize as our brothers and sisters.

2. Scripture tells us of the Lord’s special concern to proclaim the Good News to persons who were marginalized in their society due to physical or mental impairment, illness, or other disabling bodily conditions.2 In that way, persons with disabilities were among the privileged recipients of Christ’s universal call to discipleship, and they bore special witness to God’s reconciling and redemptive work for all humanity. The Church recognizes in the bodies of her members the wondrous diversity of the human family, the ordinary entailments of our vulnerable nature, and the wounded condition that afflicts all humanity consequent to the Fall.4

3. Commissioned by Christ, the Church continues to strive to fulfill the evangelical mission and ministry of the Lord, and the Church remains faithful to that call as each member learns to both receive and extend the merciful regard A Resolution Issued by the Board of Directors of the National Catholic Partnership on Disability (NCPD) on the 40th Anniversary of the Pastoral Statement AFFIRMATION OF AND COMMITMENT TO THE CALL OF THE 1978 PASTORAL STATEMENT OF U.S. CATHOLIC BISHOPS ON PERSONS WITH DISABILITIES “A Call to Encounter and to Wholeness” Christ calls us to embrace with him persons we often fail to recognize as our brothers and sisters. exemplified in the healing touch of Jesus Christ.5 Toward that end, the Pastoral Statement issued a call for a reexamination of attitude, for a renewed commitment to ensure the well-being of persons with disabilities, and for concrete steps to safeguard the full integration and meaningful participation of persons with disabilities in the life of the Church.

4. Among the central concerns in the articulation of that three-fold call was to describe the all-too-common temptation to a distorted self-understanding when we as a Church encounter notable physical, cognitive, or psychological differences in other persons.6 The Pastoral Statement cautioned that when that inflated sense of self-importance is given free reign, it can drive the wedge of prejudice and injustice into the heart of the Christian community. Even if there is no outright hostility from non-disabled Christians toward Christians who have a disability, the presumption that they are not one of us undermines the integrity and communion of the parish community.7 From that basis, the remainder of the Pastoral Statement was devoted to setting forth guidelines, principles, and practices for ministers at parish and diocesan levels.

5. In the decades that followed the issuance of the Pastoral Statement, the Church has reaffirmed and recommitted itself to its outlook. Those efforts include the catechetical guidelines in Sharing the Light of Faith (1979, United States Catholic Conference, 9, 138, 195, 213, 218, 231, 264), establishing the National Catholic Office for Persons with Disabilities (NCPD) in 1982 (renamed the National Catholic Partnership on Disability in 2002); the U.S. Bishops’ resolution marking the 10th anniversary of the Pastoral Statement (1988); providing the Guidelines for the Celebration of the Sacraments with Persons with Disabilities (1995, with revisions and updates in 2017); issuing the moral framework entitled “Welcome and Justice,” marking the 20th anniversary of the Pastoral Statement (1998); and in 2003 the U.S. Bishops’ approval of the publication of the National Directory for Catechesis which included an extended section with guidelines on religious instruction and sacramental catechesis for persons with disabilities (§49).

6. We, the Board of Directors of NCPD, reassert our pledge to uphold and implement the teachings of the Catholic Church, which affirm: (1) the inalienable dignity of every human being, formed in the image and likeness of God; (2) the respect, honor, and protection that are due to every person from conception to natural death; (3) that Christ’s saving grace and call to personal friendship extends to every member of the human family; (4) that no psychological or physical condition (Romans 8:22-38) on its own can separate someone from encountering the love of God in Christ; and (5) that each person baptized and incorporated into the Body of Christ is called to holiness and given the grace to respond to this call. We recognize that this call to discipleship and to growth in holiness is sustained through the grace of the sacraments, and we urge full implementation of the U.S. Bishops’ revised Sacramental Guidelines (noted in #5 above) in support of parish and diocesan efforts to see that persons with disabilities are appropriately prepared to participate in the sacramental life of the Church. As stated in the 1978 Pastoral Statement, “It is essential that all forms of the liturgy be completely accessible to people with disabilities, since these forms are the essence of the spiritual tie that binds the Christian community together.”8

7. We further acknowledge that every Christian receives a divine call to service and fraternal love within the faith community. As members of the Body of Christ, persons with disabilities have the proper right to be active participants in the life of the Church. We recognize that the bare assertion and protection of rights can become a sterile exercise whenever it lacks the Christian presumption of our common call to friendship with one another in Christ. For these reasons, we seek to foster the full and meaningful participation of individuals with disabilities in the life of their parish communities by offering NCPD resources and training to assist diocesan efforts to educate clergy, pastoral staff, and lay leaders to further their outreach to and support of parishioners with disabilities in every aspect of parish life. We join in hope with our Holy Father, Pope Francis, that “in communities, people with disabilities may too be catechists, also by their witness, to transmit the faith in a more effective way.”9 Finally, we encourage the promotion of vocations to the priesthood, permanent diaconate, religious life, and marriage among qualified persons with disabilities, as well as their professional service to the Church.

8. On this 40th anniversary of the Pastoral Statement, NCPD proclaims that no parish community is healthy and flourishing if it does not welcome persons with disabilities. Vulnerability, limitation, and dependency are an ordinary part of every particular human life. For that reason, it is right to expect and hope that a range and spectrum of competencies and dependencies will be found in every local parish community. When individuals with disabilities and their families are not present, the Catholic community experiences a loss. With our Christian identity as our foundation, we reaffirm our commitment to ensuring that persons with disabilities increasingly experience a sense of belonging and welcome in the parish, diocese, and Church at large.

9 “Address of His Holiness Pope Francis to Participants at Catechesis and Persons with Disabilities: A Necessary Engagement in the Daily Pastoral Life of the Church,” organized by the Pontifical Council for Promoting the New Evangelization, Vatican, October 2017. Found at: https://w2.vatican.va/content/francesco/ en/speeches/2017/october/documents/papafrancesco_20171021_convegno-pcpne.html.

Print double-sided: This document is formatted so that it can be flipped over and read in English and Spanish.
Program Type:
Clergy, Diocese/ Parishes