"Her reverence was evident": A child with Down syndrome participating in the sacraments 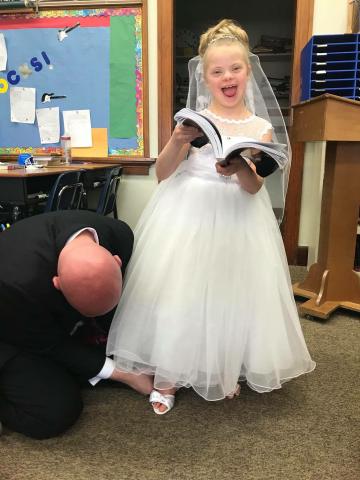 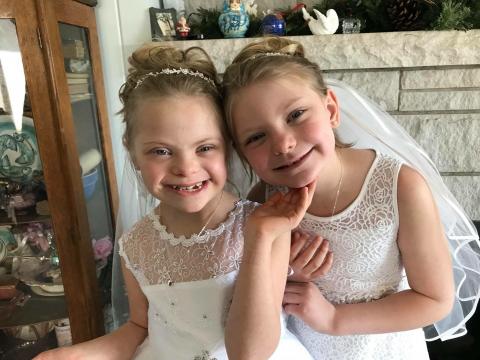 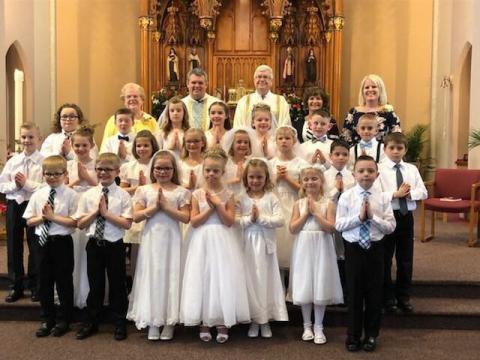 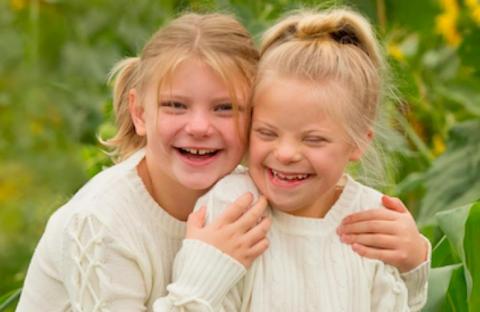 When I think back to my own First Reconciliation and First Communion, I don’t recall as much as I’d like. I remember Sister Ann, and her kindness and light, but my relationship with the Church and my faith was different than the relationship that I see growing in my girls. So approaching these sacraments with my daughters was touching, and I felt myself relearning and connecting to the Church right alongside them. However, it was not until my daughters received the sacraments that I realized how moving the experience would be.

My husband, Chris, and I have two biological daughters, RayLee (9) and Sophie (8), and 5 years ago we adopted Mila (7). RayLee and Mila both have Down syndrome and are fully included with their sister and peers at Blessed Sacrament in Quincy, IL. Chris himself participated in Christian Initation four years ago, becoming Catholic, and transitioning from a public school principal and special education coordinator to a Catholic school teacher because of our experience with the faith-filled educators and parishioners of Blessed Sacrament.

RayLee and Sophie began their journey to First Reconciliation and First Communion last year, with Chris working closely with Deacon Terry and Mrs. Lowenberg to explore ways to ensure RayLee could fully and faithfully participate. Assessment of understanding is a discussion or question I hear commonly, and the tools from Loyola Press gave us a great starting point. Beyond that, the key was open communication and collaboration between the teacher, the parish’s religious educator, and us.

The Sacrament of Reconciliation

In preparation, the class discussed sin, talking with God, and the process of reconciliation. Our concern was that RayLee would freeze in the moment, and not have the chance to fully experience the sacrament. Chris and Deacon Terry set up extra practice sessions for RayLee to help her feel comfortable. RayLee was able to focus on the sacrament and not be anxious about the various steps of participating in the sacrament with these practice sessions. Chris sat with RayLee to discuss the type of sins she needed to confess to God.

We felt comfortable with her level of understanding of the process, as she had freely participated in the practice sessions with no issue. But I wouldn’t be honest if I didn’t admit to some question of whether she understood the levity and importance of receiving reconciliation. My doubts were alleviated that evening as we sat in the pew, and RayLee’s nervousness easily matched, or exceeded, that of her sister and classmates. While RayLee held the piece of paper with sins she had written to read to our priest, she covered it protectively and folded it in half so no one else could read it. While her practice sessions repeatedly mentioned how her sins were between her and God, this moment, and that protective reaction, was a greater affirmation of her grasp of the meaning behind the sacrament.

As we went forward for reconciliation as a family, I noticed the tears of not only our family but several others in our parish family. The impact of this moment was far greater than I’d expected. At the end of her confession, RayLee threw her arms around Father Chris, and she came off the sanctuary steps at a near skip. It was clear that she experienced the gift of reconciliation.

Over the next few months we prepared for the girls’ First Communion. We followed a very similar process to RayLee’s preparation for First Reconciliation. Again, while RayLee could answer all the right questions, and appeared ready, I still found myself worried about whether she fully understood. As my girls’ most vocal champion and advocate, my own doubt still frustrated me. Leave it to God, and RayLee, to alleviate our fear.

A few weeks before their First Communion, the girls spent the weekend with my mom, affectionately known as Baba Ding. Baba took the girls to Mass at a parish that did not know the girls well, and as they were all returning to their pew, RayLee was frantically pulling at my mom. My mom turned to find RayLee pointing to her hand, cautiously and protectively cradling the Host which she’d been mistakenly given. This self-recognition that she was not yet ready for communion, along with her protective respect of the Host, was the reassurance my heart needed to knock out any lingering fear or doubt.

My girls’ First Communion was a day filled with excitement and faith-filled emotion. Again, I was overcome by the impact RayLee’s inclusion in the sacrament alongside her peers had on the other families and parishioners. Her reverence was evident, and seeing the smiling tears of our priest and her teacher as they gave RayLee the Host and the Precious Blood reinforced the magnitude of the moment.